by lankanews
The nation has arrived at a crossroads. A strong leader demands a decisive mandate to usher in a flourishing, virtuous disciplined society. To go further, we must first discover where we are – Pic by Shehan Gunasekara History may or may not repeat itself. But there is no doubt that history can instruct. Over the... Read More

Returnees from Malaysia and Kuwait confirm positive for COVID-19 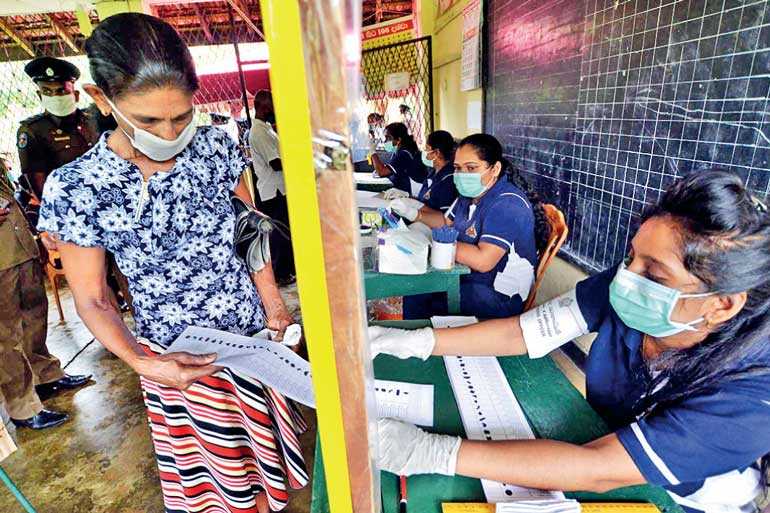 The nation has arrived at a crossroads. A strong leader demands a decisive mandate to usher in a flourishing, virtuous disciplined society. To go further, we must first discover where we are – Pic by Shehan Gunasekara

History may or may not repeat itself. But there is no doubt that history can instruct. Over the millennia, people have welcomed tyrannical, authoritarian leaders. They have willingly and enthusiastically

participated in their own oppression by willingly electing authoritarian leaders.

Why do people idolise, venerate and elect authoritarian leaders? How do we explain the ‘mob psychology’ of shameless ‘anti-reason that is immune to counter argument? Why is ‘mob psychology’ so incorrigibly and unforgivingly contemptuous of dissent? The purpose of this essay is to examine the choices we face at the Parliamentary Elections to be held on 5 August. Some relevance must be established. Let us briefly move from the abstract to the concrete.

The triumphant rallying cry of 2015, which successfully and spectacularly constructed a grand coalition of diverse political shades, toppled a popular, powerful, pretentious presidency; cannot be referred to even in passing without earning derisive laughter. That rallying cry of ‘good governance and a just society’ is an unadulterated obscenity in 2020.

Instead of a just society, a Prime Minister arrogant beyond his achievements and a President promoted beyond his worth treated the nation to a grand circus of political chicanery. It lasted for four-and-a-half years in a devastating drift. The nation has arrived at a crossroads. A strong leader demands a decisive mandate to usher in a flourishing, virtuous disciplined society. To go further, we must first discover where we are.

Why did the nation settle for a strong leader who promised a ‘secure society’ in sharp contrast to the circus of a ‘just society’? As I said before, history instructs us. The 2nd century Greek historian compared the disorder and madness of Democratic Athens with the eloquent efficiency of Imperial Rome.

Polybius in the second century was virtually describing the ‘good governance’ circus that we installed to abolish the executive presidency! The Athenian democracy is always in the position of a ship without a commander. In such a ship, if fear of the enemy, or the occurrence of a storm induce the crew to be of one mind and to obey the helmsman, everything goes well.

But if they recover from this fear, and begin to treat their officers with contempt, quarrel with each other because they are no longer all of one mind; one party wishing to continue the voyage, and the other urging the steersman to bring the ship to anchor – the discord and quarrels make a sorry show for on lookers.

The position of affairs is at full risk to those on board engaged on the same voyage, and the result has often been that, after escaping the dangers of the widest seas and the most violent storms, they wreck their ship in harbour and close to shore. The relative merits, otherwise of enlightened despots and philosopher presidents is as old as time itself. The essence of the problem is tyranny.

It is not a bad word.

A society that is weary of drift may well find itself in need of direction and purpose. For millennia, philosophers and political theorists have tried to explain why we willingly participate in our own oppression by submitting to authoritarian leaders.

When democratic order is set adrift, the intelligentsia begins to realise the gloom of lurking behind a mirage and when a gullible populace falls easy prey for smooth talking politicians skilled in pandering to their misgivings – the time is ripe for stability and order, no matter the cost. Enter the “strong man” deliverer.

The Greek philosopher Plato describes the predicament. It is when pastry baking has put on the mask of medicine. Plato was the first influential philosopher who addressed the problem of tyranny. He argued in his tract: ‘The Republic’, that democratic states were destined to collapse into tyranny. He believed that democratic forms of government created a licentious and undisciplined populace who were easy victims for smooth-talking politicians skilled in the art of pandering to their desires.

In his Dialogues, Plato explains how politicians mesmerise the masses with “unhealthy promises rather than nourishing the public good”. Pastry baking has put on the mask of medicine and the baker pretends to know the foods that are best for the body.

The greatest strength of such a leader was the devotion of their followers. The followers believed that their leader could work miracles and transform their lives. How does that happen? What was it, that compels, cajoles and convinces otherwise rational people to yield to such stubborn and unrealistic assumptions?

The answer was found by Sigmund Freud – the Austrian pioneer in Psychology. Sigmund Freud took on the task of unravelling the mystery of Max Weber’s ‘Charismatic Authoritarian Leader’. He explained the phenomenon in his seminal study ‘Group Psychology and the Analysis of the Ego’ which he published in 1921.

Freud concluded that those who are attracted to authoritarian leaders, idealised them. The leader was perceived as an exemplary, heroic human being devoid of any character flaw. Freud argued that followers identified themselves with the leader by substituting the leader with what Freud called the ego ideal. The ‘Ego Idea’ is mental image that represented one’s own guiding values.

Whatever the leader wills or desires is good, proper and necessary

The apparent helplessness of democracy to address inequality and injustice is not in dispute from there onwards. But with that being said, we must not delude ourselves that periodic elections and the spurious claim that ‘we the people’ constitute the ultimate repository of sovereignty, is ‘democracy’. For democracy to be meaningful, it must ensure liberty of the individual and the freedom to express the collective will.

A foundational myth of our times is that democracy is a carte blanche to freedom, prosperity and contented life. History is well stocked with instances of democratic society degenerating in to corruption, plunder, and tyranny. Democracy is of no consequence if it does not contain the more fundamental principles of freedom and liberty.

A Yale university history scholar Timothy Snyder has produced a pocketsize manual on ‘Tyranny’, and in it; 20 lessons we can glean from the 20th century. Tyrannical rule has its own language. ‘The people’ means some people and not others. Encounters are struggles. Inconvenient truths are threats. Any attempt to understand the world in a different way can be defamatory of the wise leader.

Most of the power of authoritarianism is freely given. We obey in advance. Adoptable citizens teach ‘power’ what it can do. Tyranny succeeds when we fail to defend our institutions. Institutions don’t protect themselves. They fall one after the other, if we fail to defend the first under attack.

When political parties succeed in suppressing rivals, it signals one party dominance and politics of collusion is a camouflage for a one-party state. When liberty is trampled upon, don’t look away. Do not get used to the oppressive system. It is easy to fall in line. Stand out. It may feel strange to be the one dissenting voice. But without that disagreeable unease, there is no freedom. Believe in truth. To abandon facts is to abandon freedom.

A foot note: I embarked on this essay with passion, fury and much devotion. One week after the Parliamentary Elections on 5 August, I will turn 77. It is a bleak world. Two of my own dearest offspring are convinced that we need a strong decisive leader. I am terribly uneasy. When it is time for me to board the ferry, I would like to step on it with no knee pressing down my neck. I would like to breathe the fresh air of freedom until my dying day. It is a hope.

Inspired success: Learning from the world’s best
Previous Post
Sri Lanka sinks in April and May, must avoid a second wave