by lankanews
We all watched the President admonishing senior officials of the Ministry of Finance and the CBSL; requesting them to bring new thinking and new ideas. There is no doubt that many officials in the public sector are merely ‘time-keeping’ in their positions and generally speaking, public officials in Sri Lanka need to be cajoled into... Read More

We all watched the President admonishing senior officials of the Ministry of Finance and the CBSL; requesting them to bring new thinking and new ideas. There is no doubt that many officials in the public sector are merely ‘time-keeping’ in their positions and generally speaking, public officials in Sri Lanka need to be cajoled into action, there is no question about that. Nonetheless I must comment on this specific instance with my personal experience in the field. 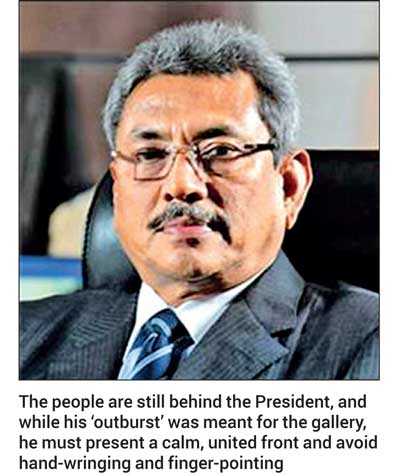 During the Presidential Election, we were sold a different tune, with a visionary leader at the helm, supported by a professional class to develop a technocracy based on meritocracy.

I am sure the President is aware of the functions of the Ministry of Finance, the Monetary Board and the Central Bank of Sri Lanka. Asking officials of these organisations to bring ‘outside the box’ thinking and fresh ideas ignores some of the realities of today’s market and economy and confuses the functions of these institutions. In terms of monetary policy, the tools are limited. Money supply within an economy is complicated, and I would urge caution and clarity when playing with these tools.

Following the President’s admonishing, the authorities decided to reduce the Statutory Reserve Ratio (SRR) for banks to ease money supply. However, this policy asserts that; previously, there was credit demand in the market which the banks were unable to meet due to a lack of money supply.

However many banks had been rejecting facilities for borrowers who had already been struggling to meet their commitments prior to the outbreak of COVID-19. In fact, if you trace the roots of our economic struggle, they began long before the pandemic. Even prior to the Easter attacks, the country’s economy was in a slump following currency depreciations and the constitutional crisis of December 2018.

The Sri Lankan economy is very reliant on the cyclical, seasonal nature of the markets, whether this is related to Christmas or Sinhala/Tamil New Year or the main tourism season. These periods of additional cash-flow and profits are what sustains a business and a household for the succeeding period of lulls which is common in most industries. However, Sri Lanka’s businesses have seen consecutive windows of opportunity open and close without the expected cash-flows.

The constitutional crisis and resultant travel bans led to a poor Christmas season with lower than expected tourist arrivals in 2018. This was followed by the Easter attacks which left the Sinhala/New Year season in tatters and tourism arrivals began to plummet. Then the elections were held towards the end of the year further compromising the year-end cycle. Then finally, the COVID-19 pandemic of 2020 will have its effects felt even toward the end of the calendar year and beyond. This means another crucial season where businesses will operate far below capacity. This cycle of economic carnage continues unabated.

Even before the effects of COVID-19, there were shocks in the industry which may not have been noticed or felt by all. The currency depreciation was one such shock, but it was followed by the slow yet constant increase in non-performing loans at the banks. Now we see these NPL ratios at very high levels and this is a reflection of people’s disposable incomes rather than poor credit decisions made by banks.

Therefore even prior to the pandemic, we had witnessed a deterioration of asset quality throughout the banking and financial sector. Stagnant wages have meant that financial leases, credit cards and other financial products are utilised leading to a larger debt burden on individuals.

Post-COVID-19, there is no reason to think that asset quality will improve; quite the opposite, people will struggle even more to meet financials commitments.

Against this backdrop, is more lending by commercial banks the answer? I would urge the industry to take great caution in increasing their loan portfolios and understand the reality in the market. If the banks are not careful, the domino effect of additional lending and deteriorating asset quality can lead to a crisis hitherto unseen in our country.

I would imagine that the President was partly using the opportunity to give a clear message to the civil service that they need to get their act together. However this could have been done in private and would have had the same effect. That it was done in public means that the President is playing to the gallery, showing people that he is trying to work but that people are not assisting him. He even gave the idea of lending to companies against funds owed to them by governmental institutions, mainly related to the construction industry.

Previously, many construction companies struggled to settle overdrafts, import bills and term loans due to non-payment by the governmental institutions. I would imagine that there are very large unpaid bills at the UDA, RDA and so forth. Can the banks afford to lend against these, when payments from the Government have not been forthcoming in the past?

During the Tsunami, myself and a few senior bankers got together and proposed various policies to the CBSL and the finance ministry. Perhaps the President should seek the views of the top CEOs of the financial sector; the country needs leaders, not simply managers. Many of the talented CEOs are simply managing their operations, however we need them to come forward and help to guide policy.

The people are still behind the President, and while his ‘outburst’ was meant for the gallery, he must present a calm, united front and avoid hand-wringing and finger-pointing.